A single PDF of the paper and the supplementary is available at arXiv.org.

Light Field (LF) offers unique advantages such as post-capture refocusing and depth estimation, but low-light conditions, especially during night, severely limit these capabilities. We, therefore, propose a deep neural network architecture for Low-Light Light Field (L3F) restoration, which we call L3Fnet. The proposed L3Fnet not only performs the necessary visual enhancement of each LF view but also preserves the epipolar geometry across views. To facilitate learning-based solution for low-light LF imaging, we also collected a comprehensive LF dataset called L3F-dataset. Our code and the L3F dataset are now publicly available for download. 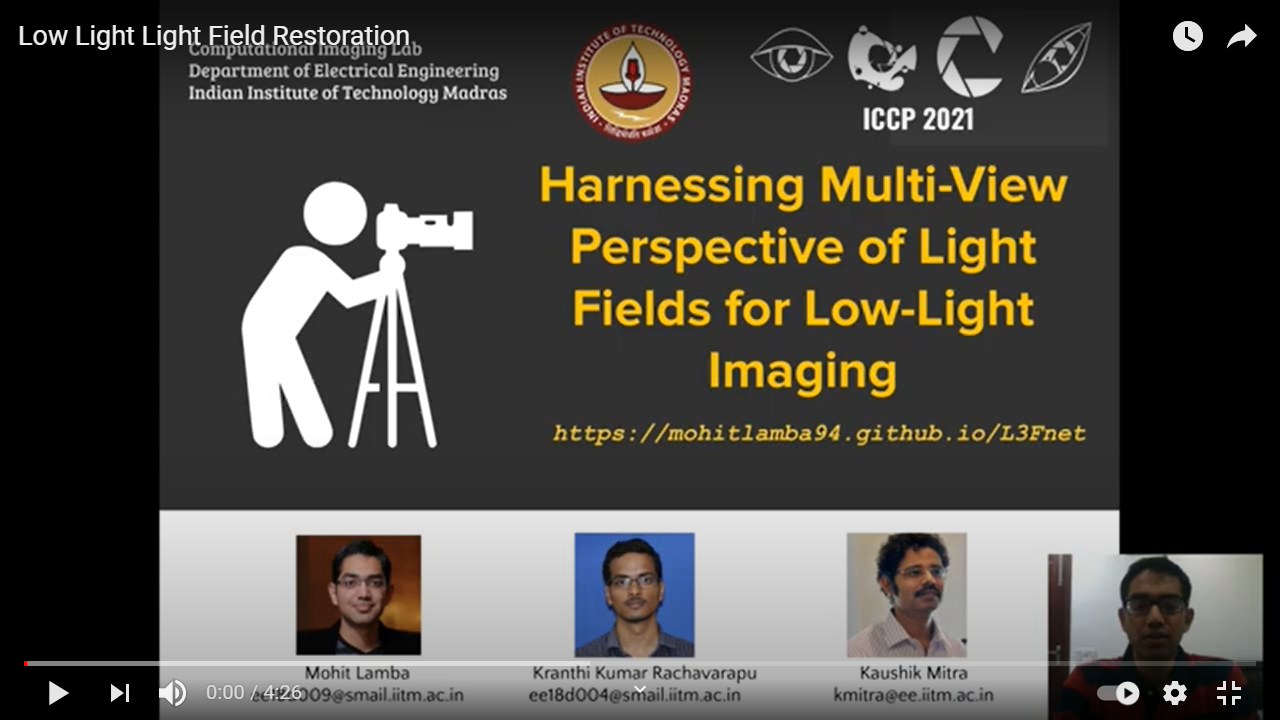 Low-light conditions are a big challenge to Light Field applications. For example, the depth estimate of LF captured in low light is very poor. Our proposed method not only visually restores each of the LF views but also preserves the LF geometry for faithful depth estimation, as shown below (Click to see full resolution image). 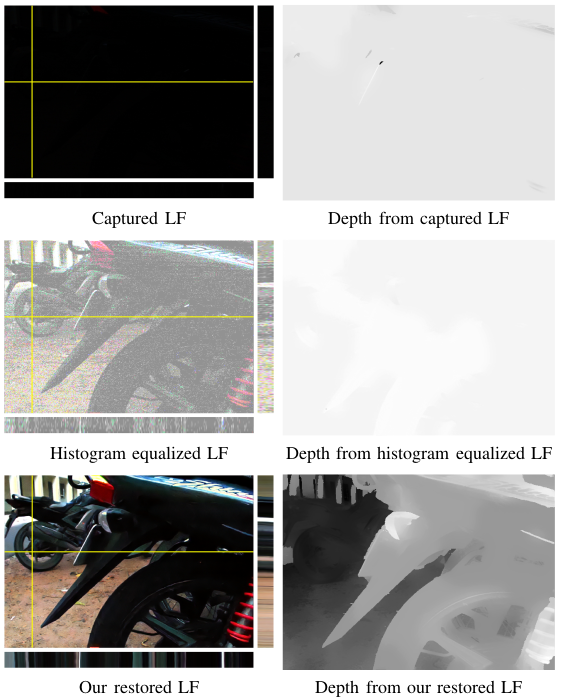 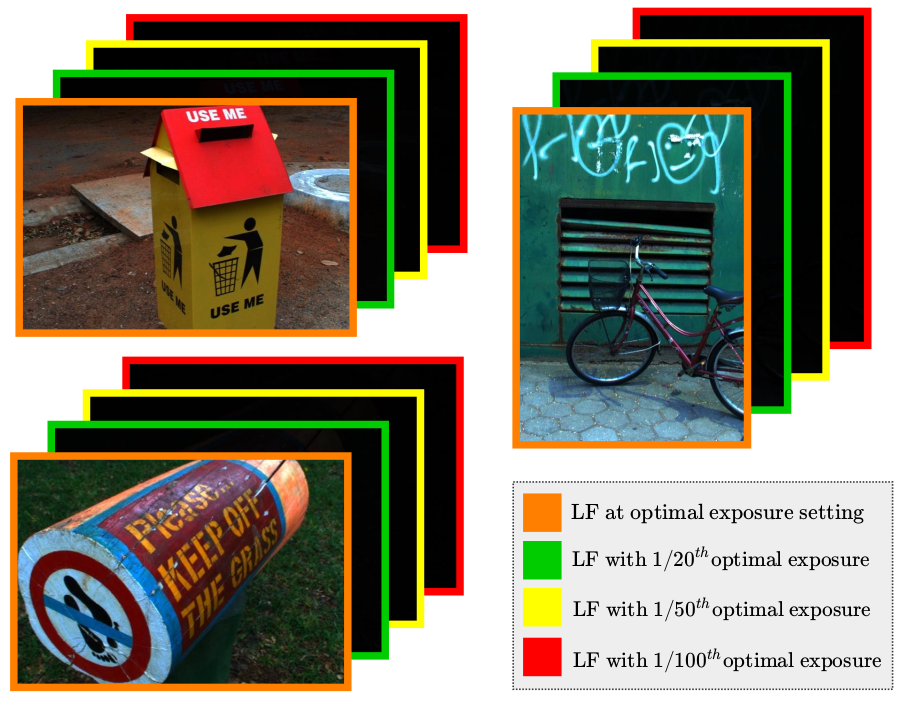 Unlike most previous works on low-light enhancement we do not simulate low-light images using Gamma correction or modifying images in Adobe Photoshop. Rather we physically capture Light Field images when the light falling on camera lens is in between 0-20 lux.

The L3F-dataset used for training and testing comprises of 27 scenes. For each scene we capture one LF with large exposure which then serves as the well-lit GT image. We then capture 3 more LFs captured at 20th, 50th and 100th fraction of the exposure used for the GT image. A detailed descrition of the collected dataset can be found in Section III of the main paper.

The RAW format used by Lytro Illum is very large (400 - 500 MB) and requires several post-processing such as hexagonal to rectilinear transformation before it can be used by L3Fnet. We thus used JPEG compressed images for training and testing. Even after compression each LF is abour 50 MB is size; much larger than even raw DSLR image. Although we do not use raw LF images in this work, we also make the raw LF images public.

The Light Fields captured in this dataset were captured late in the night in almost 0 lux conditions. These scenes were captured with normal ISO and exposure settings as if being captured in bright sunlight in the day. The scenes in the L3F-wild dataset are so dark that no GT was possible. Thus they cannot be used for quantitative evaluation but serves as a real-life qualitative check for methods which claim low-light enhancement.

How to use the Code ?

The L3F code and dataset is arranged as below,

The jpeg directory contains the decoded LF in .jpeg format and were used in this work. The well-illuminated GT images are present in the directory called 1 and the other folders, namely 1_20, 1_50 and 1_100 contain the low-light LF images with reduced exposure. The original undecoded raw files captured by Lytro Illum can be found in the raw directory. The corresponding raw and .jpeg files have the same file names.

To find the well-lit and low-light image pairs, alphabetically sort the directories by file name. The images are then matched by the same serial number. An example for the L3F-100 datset is shown below,

The code for L3F-net can be found in L3F-net directory. Execute demo_cum_test.py file for a quick demo. This file restores the dark images present in the L3F-100 dataset. The expected output images after excuting this file are given in expected_output_images directory. To successfully execute this file you need to set the following variables.

L3F-net can selectively restore SAIs. As restoring all 64 SAIs takes a lot of computation and so in this file we restore only two SAIs to save computation. If you wish to restore more number of SAIs, simply include the desired SAIs index in the choice variable present towards the end of the data loader.